I really hope my friend Ann wont mind that I am sharing one of the cards she asked me to make for her...

It was one of the unusual requests – the man was a pigeon fancier so what could I do....

I ended up using a My Craft Studio cd – it was from the 10 cd Anniversary set and called It's A Man's World.

I had to fiddle with the sheets but it went perfectly! 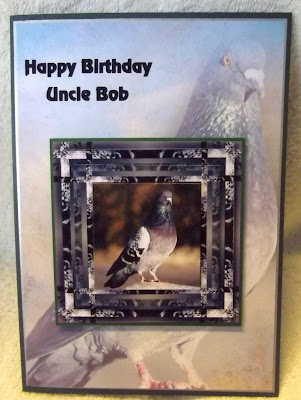 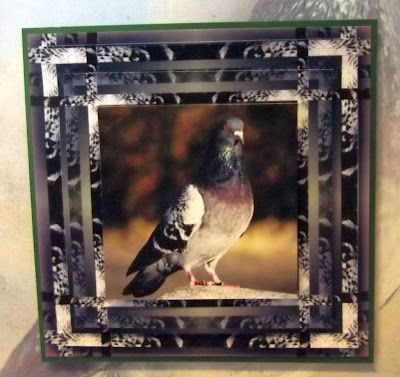 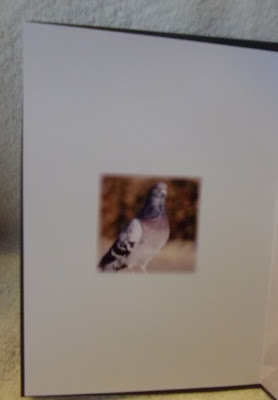 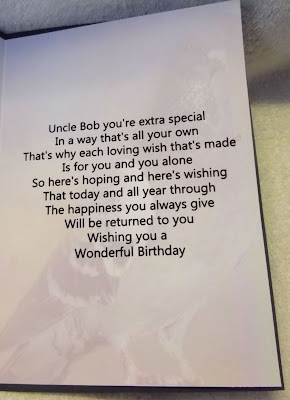 So after all the printing was done I used an A4 sheet of dark green card to create my A5 card blank, then cut the backing paper which had a full pigeon on but was well faded out and the words Happy Birthday Uncle Bob – to fit the card leaving an equal border all around the card.

I matted the base image onto green card and attached to the centre of the card so it didn't interfere with the printed sentiment – then after cutting the pyramid panels I used large sticky pads to build them up.

For the insert I have reduced the size of the pigeon to passport size and added to the left side and my verse to the right hand side... again this had a faded out pigeon picture to it!

Just for an added extra I made a bookmark from printing 2 patterned strips one of which I flipped so it had the same design on both sides! I stuck a piece of card between the printed paper and then punched a hole and added a large eyelet and a piece of ribbon to finish!

Ann was really pleased with the finished card – hope Uncle Bob was too!!!