Hiya
This card is one I actually made a couple of weeks ago – I think I'm a tad childish at times cos when I get a new cd I just have to print out and get a card made
And that's what I did the day Miranda & Mo landed on my doormat
The cd is by www.kraftyhandsonline.co.uk
Its a really cute and full cd – all to do with the lovely Miranda and her true friend little mouse Mo...
The art work is great – and if you go for a design set it has a scene background to use with the images – as well as sentiments and tags – such a lot crammed onto 2 sheets of printing!
I'm sure you will be seeing many more cards featuring Miranda & Mo. 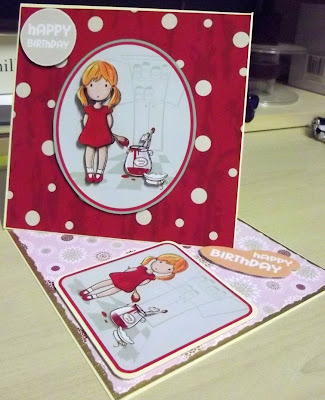 So materials for this card I used ….
Heat mat to work on and protect your surface – I always use it...
A4 sheet of cream card and a 6x6 piece
Printed decoupage sheet and a printed backing sheet
Gold patterned card
Fancy edge cutter by Woodware with deckle edge blade
Sticky pads
Eazi Score Board & tool
Tonic 8” guillotine
Scissors
Tweezers
Shaping tool from www.dimensionstamps.com
Foam shaping mat – stamping mat or even a mouse mat 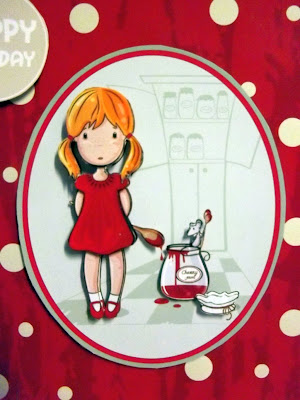 To make the card …
I cut out the main image and the decoupage then decided to make up a twisted easel card as I haven't done one for a while.
So my A4 cream card was scored to create A5 card blank then turned and scored again on the A4 line – this was trimmed away to leave a 6x6 card blank. 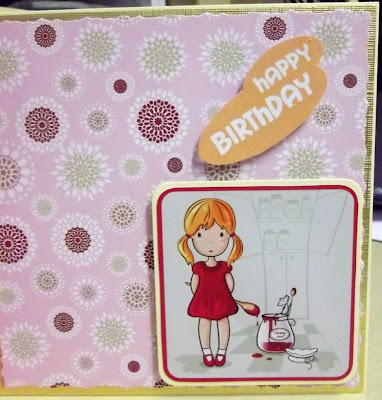 I opened it up and using just the front page I scored a line from bottom left corner to top right corner and creased
This was the base of the twisted easel. 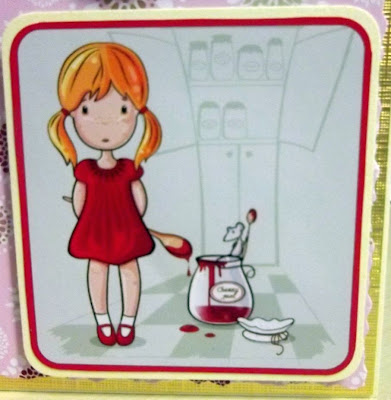 I trimmed the base layer a tad so it would fit onto the 6x6 piece of card and leave a very narrow all round border – this was then attached to the easel making sure I only added double sided tape to the part of the card that would be on the folded card front.
I printed a contrasting backing paper and trimmed it down using the deckle edge blade in the trimmer so it would fit the gold card leaving a border 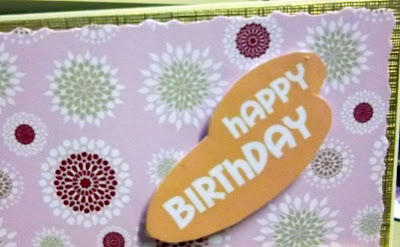 The gold panel was now stuck to the card base with double sided tape, then the trimmed paper onto that.
I roughly cut out a sentiment and as square tag and stuck these to scraps of card to strengthen
They were cut out then have thick sticky pads added and were placed so they both became part of the easel stopper.
I cut out a circular Happy Birthday which I added to the top left corner with sticky pads 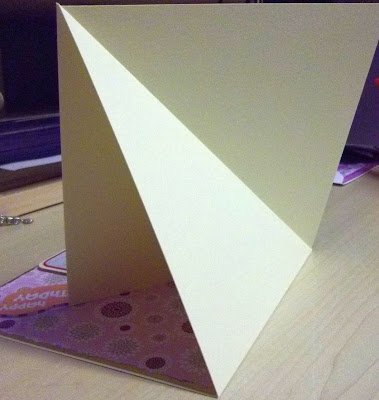 To finish I used some glossy accents on the sticky red cherry jam and the spoons that Miranda and Mo were holding
And that's it all done!
Its the kind of card that would suit almost all ages – don't you agree?
Had a new cd arrive today so watch out for something from it in the very near future!!
Its another card in my “to use or sell” box
See you again tomorrow friends!
x