Hello...
If you checked out my blog yesterday you will have seen the 1st of the cards I did for the last minute card order I was given
This is the other card
I was told it was for a lady who is crazy over Care Bears
Have to admit its not the kind of thing I have done before and didn't really know where to start
I had printed off a sheet of lovely pink gingham paper for a card I planned to make but seeing it against the decoupage sheets I decided to use it 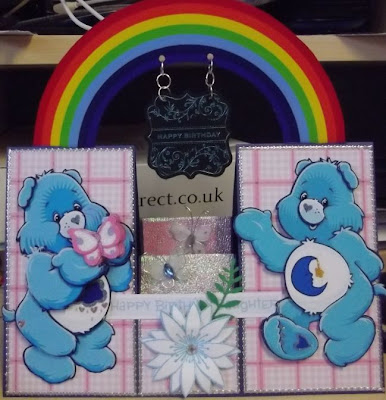 I folded the lovely deep blue sparkly card in half – then decided the card would work better as a stepper card – so started again and left wide outer panels and just narrow centre steps
The side panels were covered with the pink gingham and edged with silver peel offs. 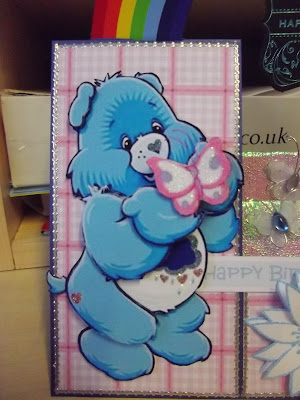 I added a small piece of the paper to the bottom front of the card and again edged with the peel offs.
I cut out 2 different sheets of care bears and built the decoupage on both 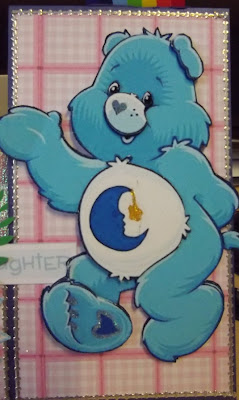 I attached one bear to each side of the panels and then I was stuck!
Suddenly it occurred to me that Care Bears always had a rainbow on set – in fact I believe they slide off the rainbow.
So I found a bright colourful rainbow which I printed twice and stuck back to back – I did add light weight card to the middle to stiffen it a touch. 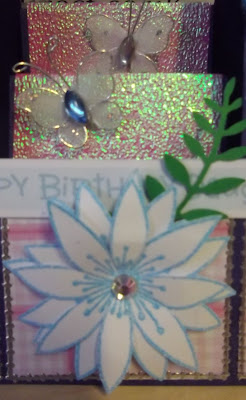 So with the rainbow ready to be used – where could it go?
So I used a sharp craft knife and made a split on the fold of he step and slipped the rainbow in so it was approx 1cm in – I used strong double sided tape to attached the ends of the rainbow to the card base. 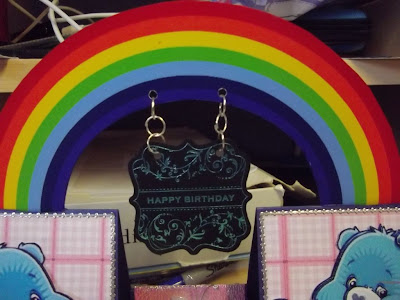 The centre steps were covered with a pearlescent pink paper and a small fabric butterfly added to the steps with silicone glue
I found a nice Happy Birthday sentiment so punched a couple of holes using my crop-o-dile then used a few jump rings to create small chains – punched a hole in the rainbow and dangled the sentiment!! 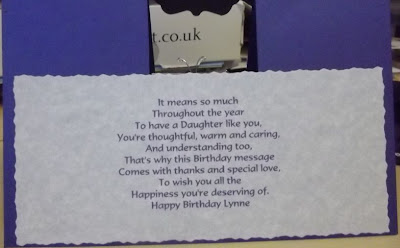 I added a Happy Birthday Daughter which fitted between the bears nicely.
And finally I used a lovely pale blue stamped and heat embossed flower with punched green leaf on the bottom of the steps. 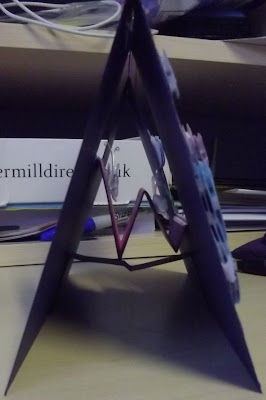 A quickie glue pen was used to highlight sections of the bears then covered with glamour dust to finish
Its a really lovely card which I am sure will be loved by the lady I made it for as well as her daughter in Australia she is sending it to!
See you next time
x