Hi
I am well and truly at the end of my tether now!
We have the neighbour from hell...
He hasn't moved in but comes to the house late at night and stays all through the night but he is banging, drilling, shouting, running up and down the stairs and so on – as we all know once people go to bed we hear all goings on so you can imagine just how loud hammering will sound at 3am
Just before Christmas hubby was so fed up with it he got dressed and stormed round to see him at about 3am – hubby didn't knock but walked straight in and confronted the neighbour who said he was trying to get the house ready so he and his wife and her kids could be in for christmas – Pete explained how unfair it was to work through the night and that nobody would even notice the banging during the day
Last night I really was in mega pain – t the extent I was in tears – and all I could hear was what sounded like sawing pipes – it just grated on me
So hubby & I ended up sat up in bed playing games on our phones ALL NIGHT
At 4.20am I flipped – stormed round in my dressing gown and pounded so hard on the door and front windows I was convinced I was going to put them through – the prat wouldn't answer the door!!
So this morning I rang the council who put me through to Environmental Health and the noise management team....
I've spoken with neighbours who say they thought it was us doing some work so they have agreed to speak to EH when they come to see us
He is early today – the noise has started – jokingly hubby suggested we take the duvets and sleep in the car – believe me I am sooo tempted!
Rightio – moan over
This is a smashing card made using the new Debbi Moore Roaring 20's cd – I have to say I love it big time!!!
And this card was just so quick and easy. 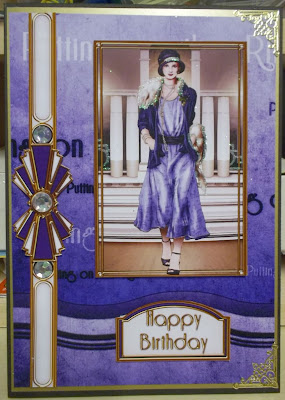 So materials for this card I used ….
Heat mat to work on and protect your surface – I always use it...
Main image sheet
Crocus border backing paper
A4 black card
Piece of gold card
Sticky pads
Eazi Score Board & tool
Tonic 8” guillotine
Scissors
Tweezers
Shaping tool from www.dimensionstamps.com
Foam shaping mat – stamping mat or even a mouse mat 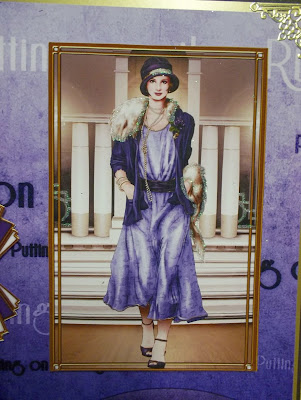 To make the card …
I started by folding the black A4 card in half to make my A5 card blank.
The sheet contained everything I needed to make the card...so the backing paper was cut out and matted onto the gold card which was then stuck to the black card blank using double sided tape.
The border was cut out and I used sticky pads on the reverse and stuck this down the fold edge of the card

The lovely art deco design embellishment was then stuck over the middle section of the border – again I had used sticky pads.
The main image was attached to the card – I used the foam on a roll for the back of this as it was a large area
And finally the sentiment was stuck with pads below the main image

I simply added 3 gorgeous faceted large AB self adhesive gems to the border then used a quickie glue pen and glamour dust around the edges of the fair stole...
I love the colours of the card – and due to using a new camera it really shows the vividness of the shades of purple
Bye for now
x