Hi there
Well I am getting worse don't you think? I said I wanted to post every day and again I have missed a few – sorry to all my followers!
This card is what we did in my classes this week – have to be honest I wasn't too sure about it then when the ladies saw it their faces told me I had got it wrong
BUT
I have to say almost every one who made the card really enjoyed it!
Its a steam punk design made by using an embossing folder with clocks, kraft card, brown parcel paper, black card, silver card, backing paper then dies – we used assorted cogs, flourishes and a butterfly – oh and mica powders
The one thing they all struggled with was not using a cutter, scissors or knife except to cut down the A5 card into a square! 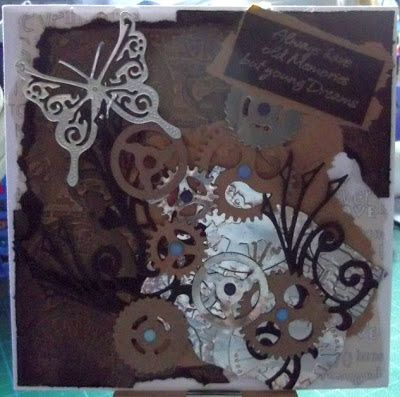 So the card was a square, the backing paper was torn to fit the card front and stuck in place.
I then torn the A5 black card into half and one of those in half again.
The large black and just one of the small pieces were then embossed – I used several pieces of the brown parcel paper together to emboss as one piece just tore... 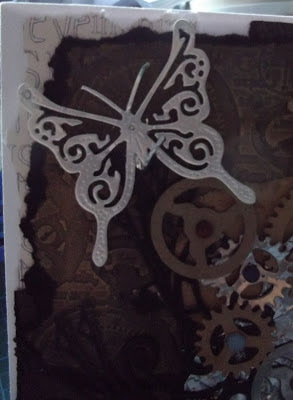 To get all the die cutting and embossing done in one go I used the kraft card and some silver to cut out cogs – think I used about 7 in all, then cut the butterfly from the silver and finally some flourishes from the black card that was left over. 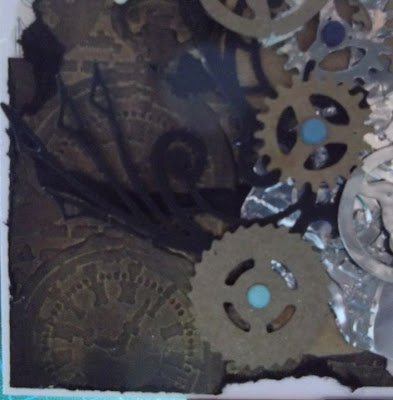 I used 2 different mica powders – a gold and a copper, I just lightly brushed the mica over the black embossed pieces, then after tapping off any excess I sprayed lightly with the cheapest possible hair spray to set the powder. 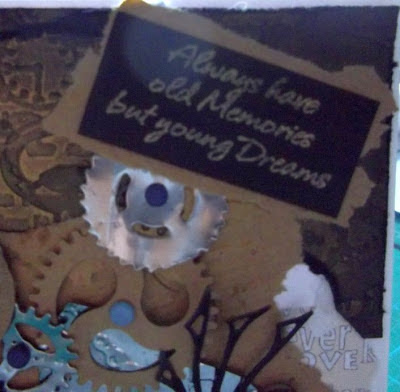 To make up my card I toe the edges of the largest black piece so it would fit nicely on the card, the smaller piece I tore into 2 triangles which were used as corners – so all the black work was glued in place, then the parcel paper was torn down and added to the black piece and smaller still with the silver - the pieces were stuck on with cosmic shimmer pva glue. 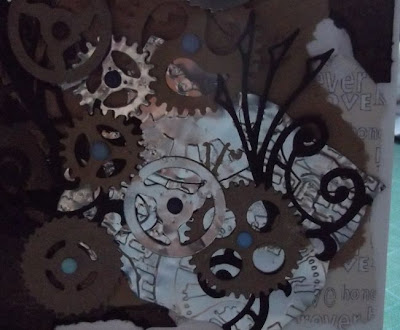 Now the cog – I popped a brad through the centre and folded the legs back then stuck in place with pinflare gel – most of the ladies actually put the brad right through the card
Then it was just a case of stamp the small sentiment onto a scrap of black card then mat onto either the brown paper or the kraft card and fix to the front of the card
Card done!!
So I have had 15 people using the same ingredients and their OWN imagination so every card was unique and I loved it all...some used bright pinks and blues in the micas others used greens and browns – but every card looked great
And as the class ended I got so many lovely comments on how they had thoroughly enjoyed the class and the chance to try things they had only seen in the past.
On my card I actually cut up a pepsi can and used that to cut the cogs and embossed it for the front but decided for safety in class we would have to use some matt mirri card...it worked every bit as good
Thanks for stopping by – would love to know what you think of this card
Its going in the use or sell box – just don't know who I could send it to
See you next time
x