Yet again I am starting my blog with apologises – i know I said last time I wanted to get back into more regular posting on my blog – don’t know where the time goes, or my days feel as though they are crammed full so once again it the blog that suffers.

We are holding an all day Christmas workshop on Tuesday so I thought I would share the 2 cards I had to make, so will post one now and the other tomorrow (it’s now almost 2.30am on Monday and you will have guessed I am not sleeping too well again.

This card is based on one I made my hubby several years ago but I have scaled it down so it now fits into an A5 envelope. 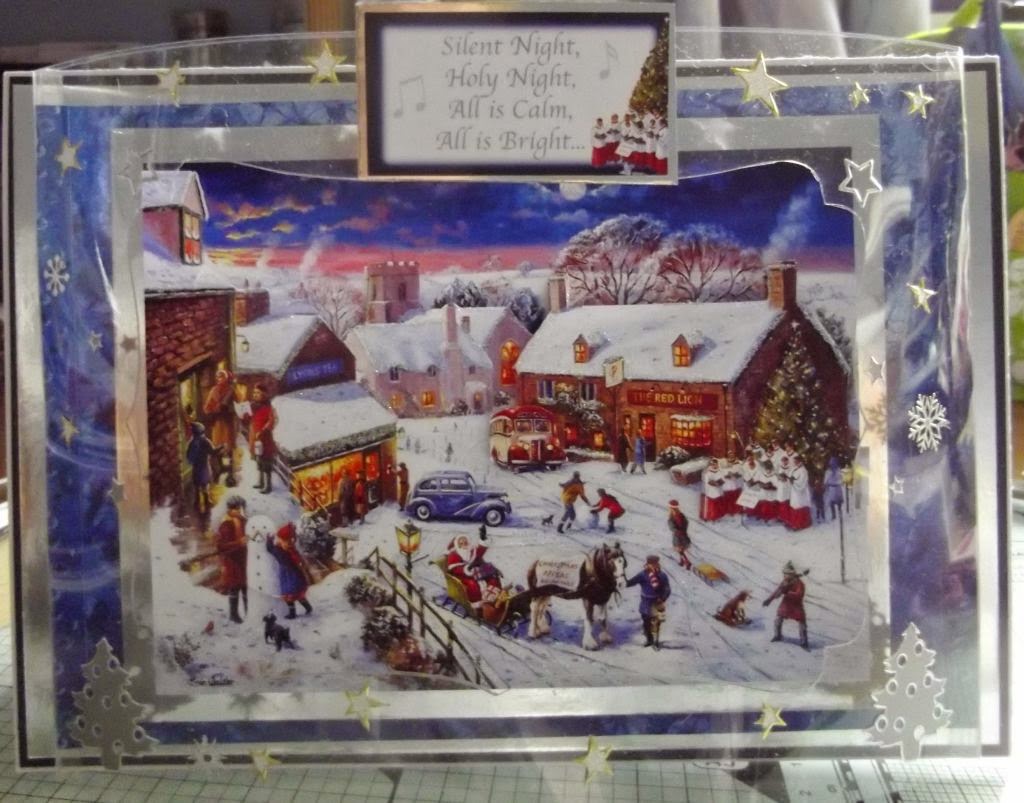 So to start with i printed my decoupage sheet from Joanna Sheen’s Nostalgia CD, the decoupage was cut out and then I used mini sticky pads to build up the design,.

Making the card consisted on folding a sheet of white card in half to create the A5 blank.
Onto the white I stuck on a piece of dark blue card, next it was shiny silver
So far so good.... 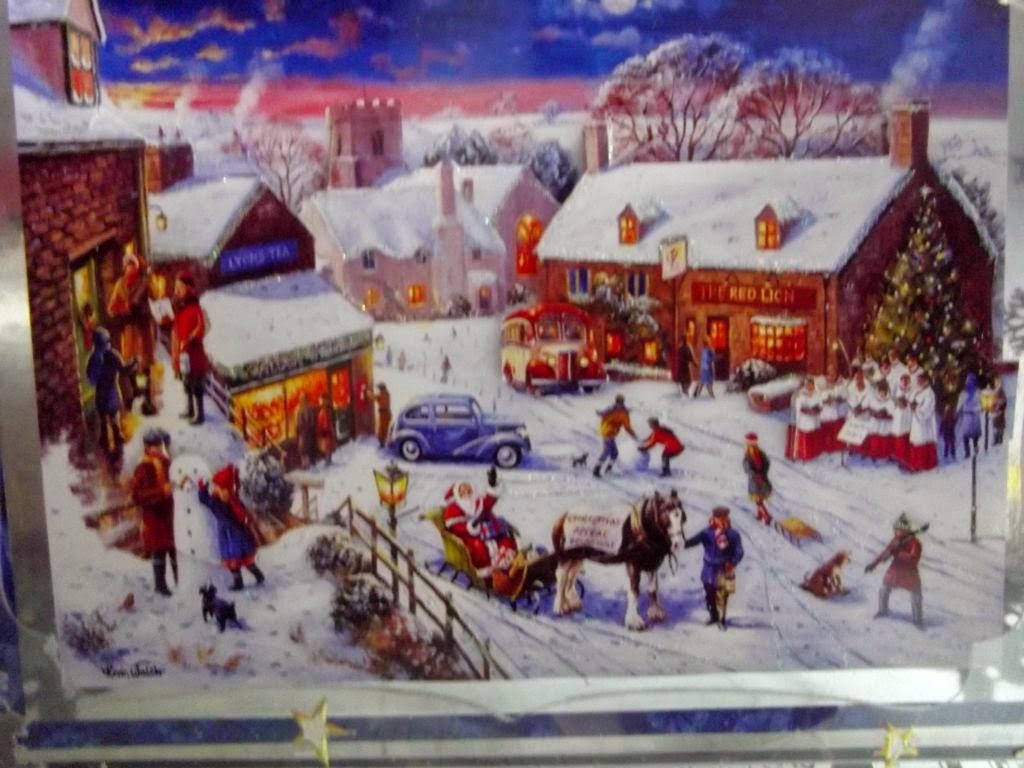 I used a sheet of acetate that was slightly wider than the main image, this was to allow for the image to be matted onto shiny silver and then the acetate to bow.

Using a fancy shaped Nestability and my Big Shot I found the centre of the acetate and cut out an aperture, not sure if it was thick acetate or wrong sandwich but I had to have a double shim for the acetate to eventually cut through...

Now I cut out a mat of blue printed paper which was slightly smaller than the shiny silver I used a few steps ago, using the super sticky red tape, I stuck the acetate across the left side (short side) and left that to one side again 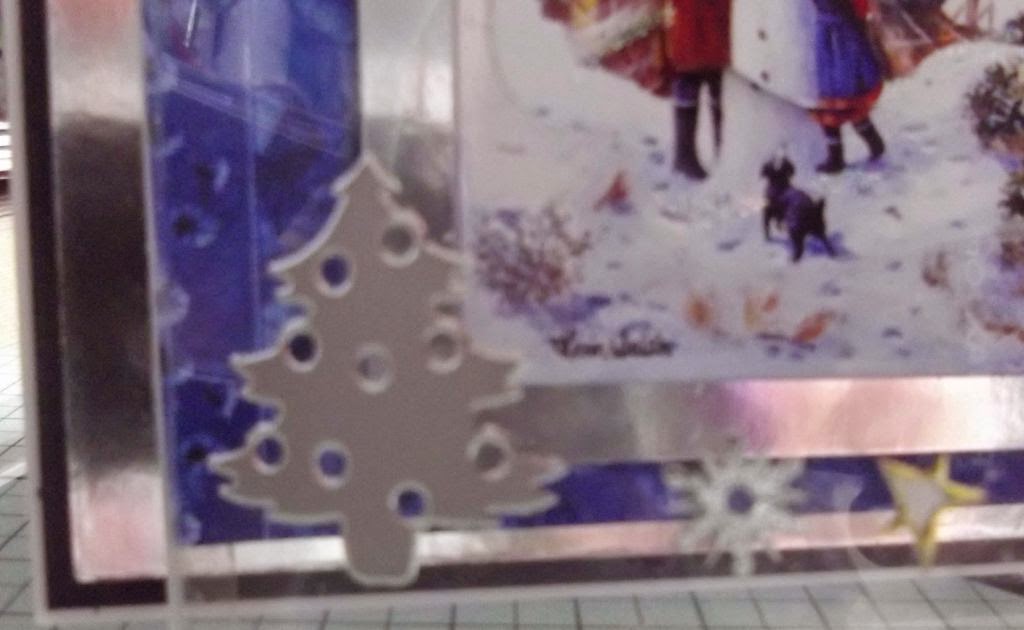 Back to the image, I matted this onto shiny silver mirri card leaving a wide border all around; now this was stuck onto the blue backing paper. Once this was all in place I stuck it down but for now I left the short sides unstuck, this was so I could position the acetate and get it stuck in place.

The bow of my acetate makes it stand proud by around 2cms – this is a matter of taste, it could be 0.5cms through to around 3cms, just bear in mind that the higher the acetate stands the deeper the box you will have to make for it.

To finish off the card I lightly glittered the snowy scene, the roof tops had a thicker covering as did the taller of the trees.
The acetate can be left clear but I decided to add some peel offs that I have had in my bits box....so a couple of small silver trees then lots of small silver stars and snowflakes. 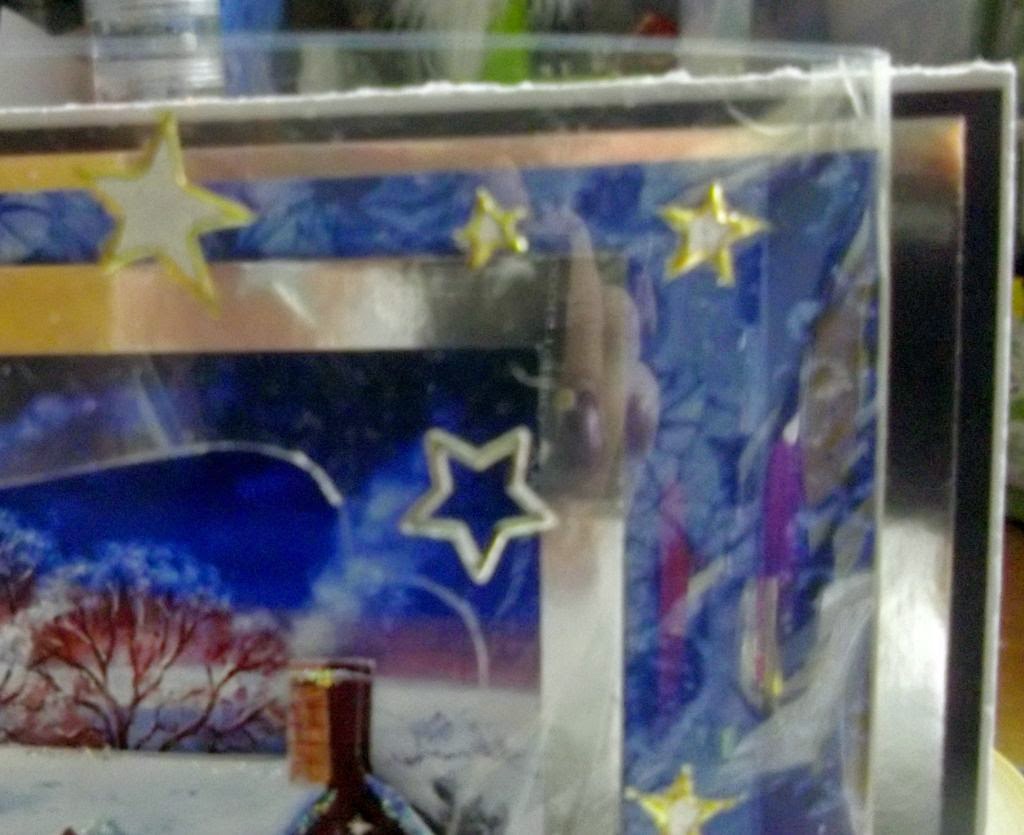 Last thing was to stick the sentiment on the top of the acetate; it’s not really a sentiment it’s the first few lines of Silent Night

So there we have a lovely and unusual Christmas card – it could be used a special card or just an every day one.