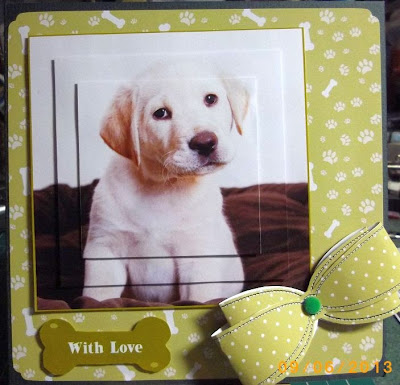 Its from the Kraftyhands Cute Puppies cd ROM that was launched a couple of months ago and all I can say is if you haven't seen this before just go ahead and get it – its super cute and the bows are fab when made up!!!
I used a dark green A4 card that was folded on line 7 of the Eazi Score Board then turned and scored again on line 7 making the square card needed. 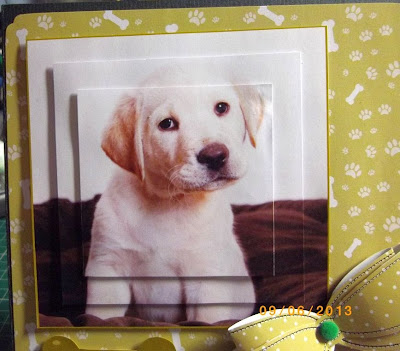 I printed the sheets needed and cut them out – have to say this is such a quick and easy card as it has the backing paper and 3 squares to form the pyramage, then the bow.
Before sticking the backing paper to the card blank I nipped the corners with what I now know is called a Lip shaped punch. 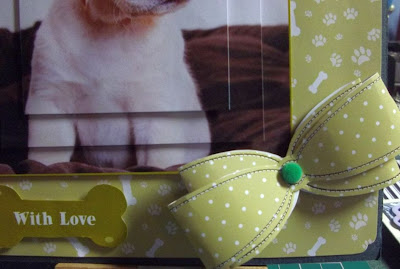 Then it was the squares which I used large sticky pads and because its pyramage and sometimes it runs off pattern slightly I used my Pit Stick on the pads so I could move it if need be.
To make the bow is so simple – there is a great tutorial on the cd for them – but its the long piece at the bottom white side up, then the smaller piece – a hole is pricked the each end of both pieces and in the centre, then push the brad through the centre (so its sat on the patterned piece) then fold the long left and long right edges onto the legs of the brad followed by the short edges and fasten off the brad
All that's left then is to plump the bows up a little if they had flattened in making them
I stuck the bow to the bottom right corner of the card and added the bone shaped sentiment to the left side
Now tell me – isn't this just the cutest – and quickest card?
Be back again soon
x