Something Old - Something New!

Something Old - Something New
Good afternoon blogger friends
Not been around for quite some time now, won’t go into it but with health issues and some personal stuff it’s been a pretty rough ride but now I am back on smoother ground. 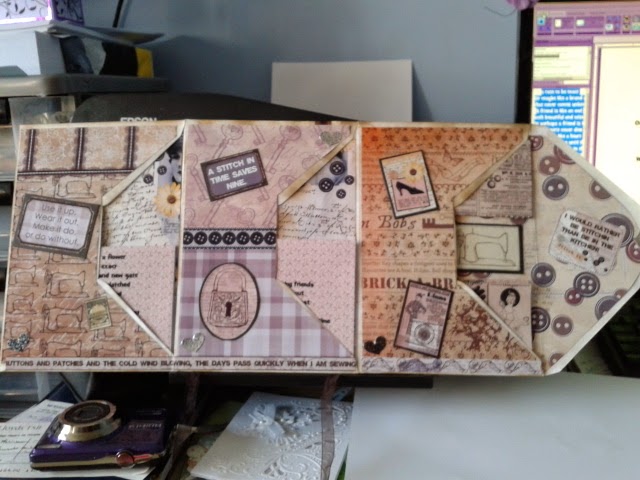 I made this card as a special birthday card for a friend who loves sewing and knitting and recently I got her into crafting which I think may well have taken over now – opps lol...still us crafters all became addicts quickly so its another in the worldwide club! 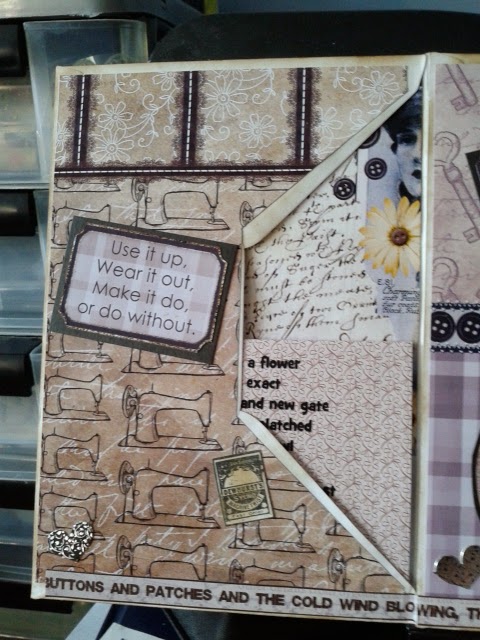 I saw the theme for the CD Sunday Challenge Blog was Something Old Something New and this card really did fit the bill perfectly,
I used Debbi Moore Shabby Chic Haberdashery cd for all the papers and images used. 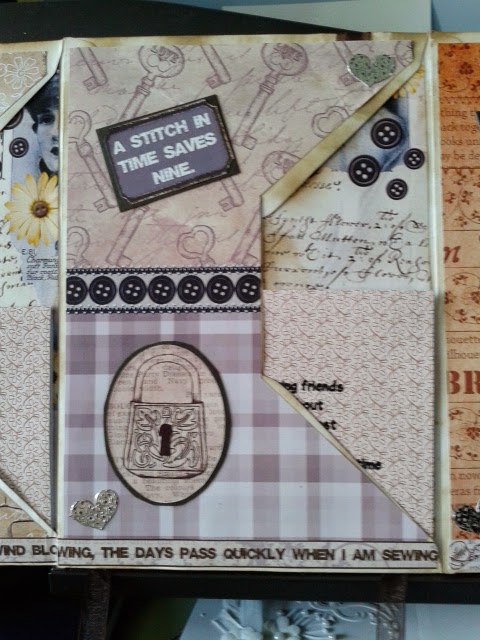 I started off with 3 A5 sized envelopes with a V flap, laid them all side by side with the flap under the next envelope and stuck them together – so the left envelope was stuck underneath the centre envelope which was then stuck under the right envelope, this left the right V on show. 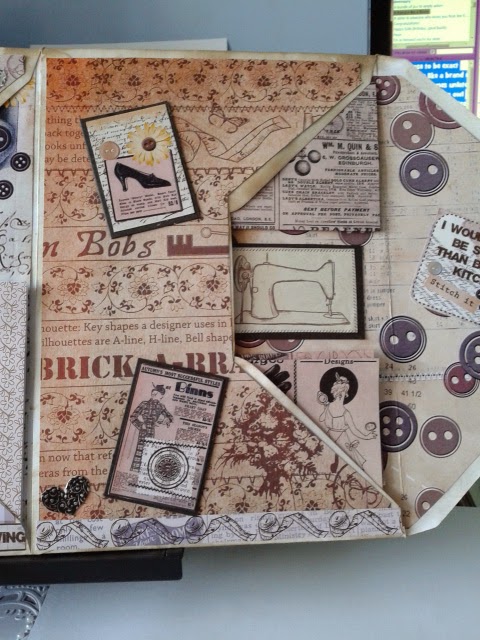 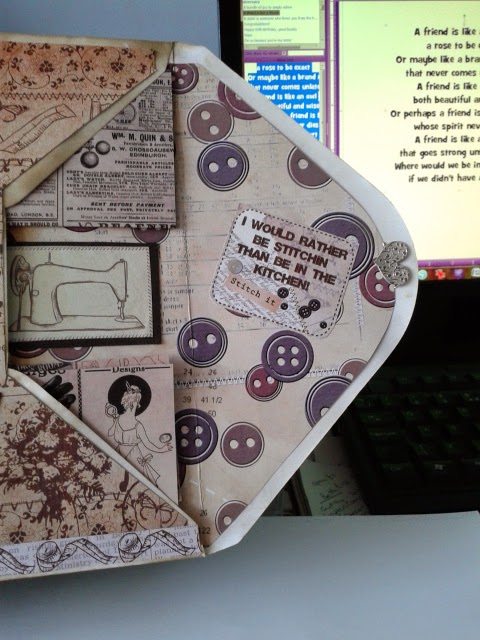 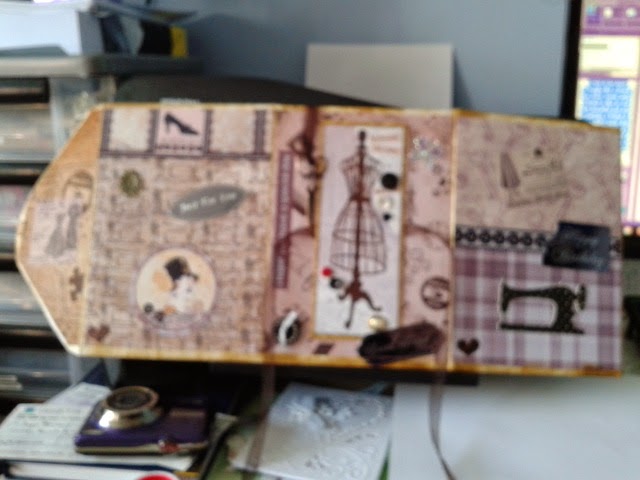 Once that as done I printed out 2 sheets of petty backing paper from Kanban Seasons cd then added sentimental verses to both, folded them both and slipped inside the envelopes. The envy on the right had the V covered and I popped a sheet of old advertising paper inside. 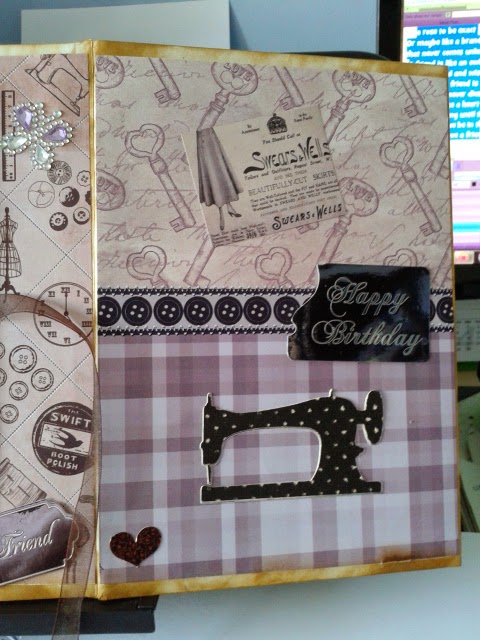 Turning all the envelopes over to show the blank fronts I continued the theme of covering with haberdashery backing papers, leaving borders on all sides were possible.
Once all envelopes were backed on the front and the back I began the embellishing. 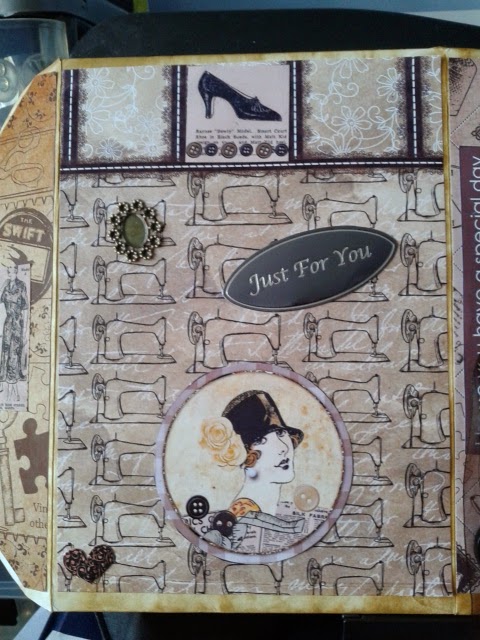 Again these came mainly from the Debbi Moore cd but I had been sent a lovely old sewing machine someone had taken the time to mat this onto silver and cut out to leave a fine border – it blended in lovely. 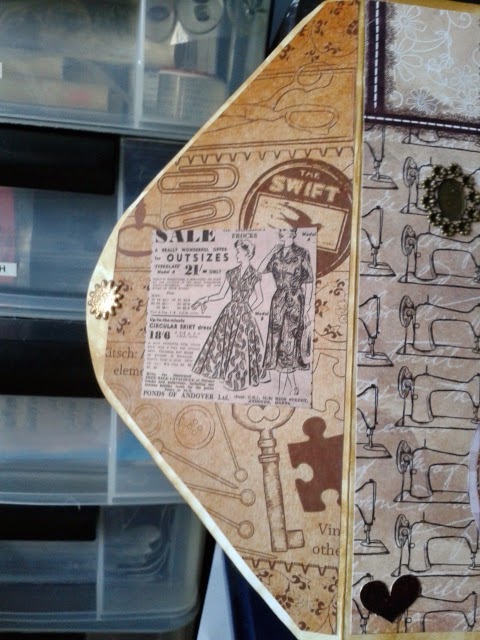 I matted images onto dark brown card so they would stand out on the backing paper.
In my sentiments box I came across some brown mirri card greetings that were embossed with gold so they were randomly placed on the card.
Amongst the same box were lots of matching heart shapes so they too were added here and there across the card.
It then struck me how would I close the card – so I chose a larger image, matted it onto gold card then used a metre length of brown organza ribbon which was stuck behind the gold card and then stuck onto the middle envelope front. 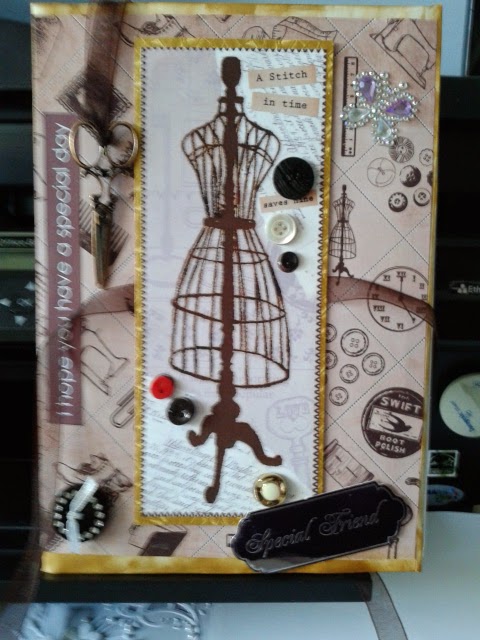 What I really didn’t like now was the white edges all around the card so I used a blending applicator and Tim Holtz Frayed Burlap to ink all the white – now that’s much better!
To finish my creation I used some old embellishments, namely the large metal scissors which I added to the front by tying a piece of the same brown organza ribbon through the finger holes then secured it under the edge of the paper with a piece of red double sided tape.
The other old embellishment is on the left side of the envelope front, I found this pretty flower surround metal button type thing in the street some years ago and it’s been sat in the button box – it was only when I rummaged for buttons to randomly place over the card I spotted it...and it looked perfect!!!
So there we have it- my something old something new project – not a wedding in sight either!!!
Thank you for popping by
x