Good Evening
I have a bit of a treat for you all today but I must tell you the story behind it first!
My lovely friend Liz has been quite poorly of late and I knew she had lots of card orders and needed to restock the local post office with Valentine’s cards.
Now I know Liz would do absolutely anything and everything she could to help me should I need it so I wanted to do the same for her
I sent a text message saying I was feeling much better and had been in my craft room so if she would like me to do her some of the cards she had to do I would be more than happy to help out.
At first she said no she would manage and if not never mind but I told her that was silly when I can help her out 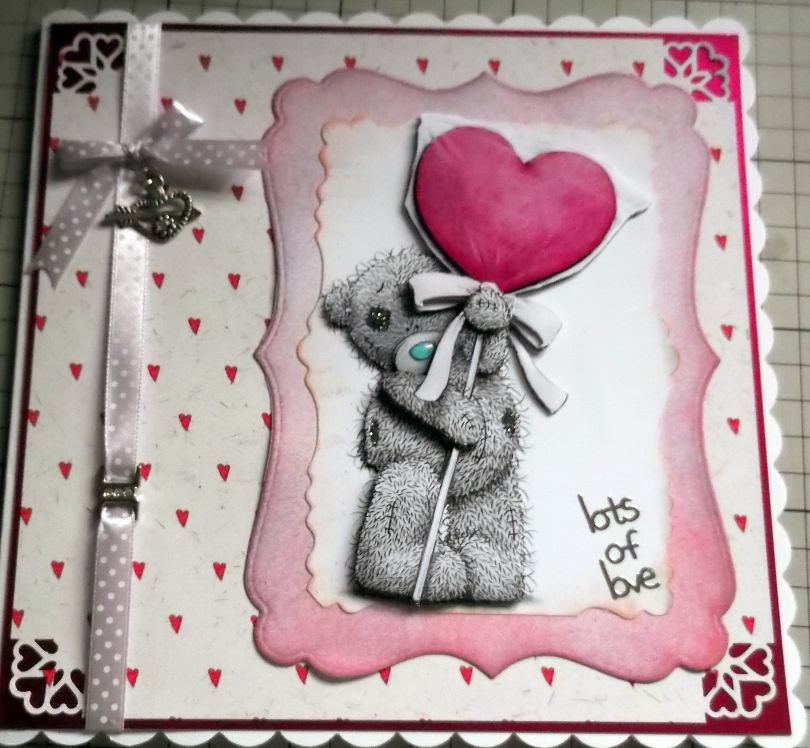 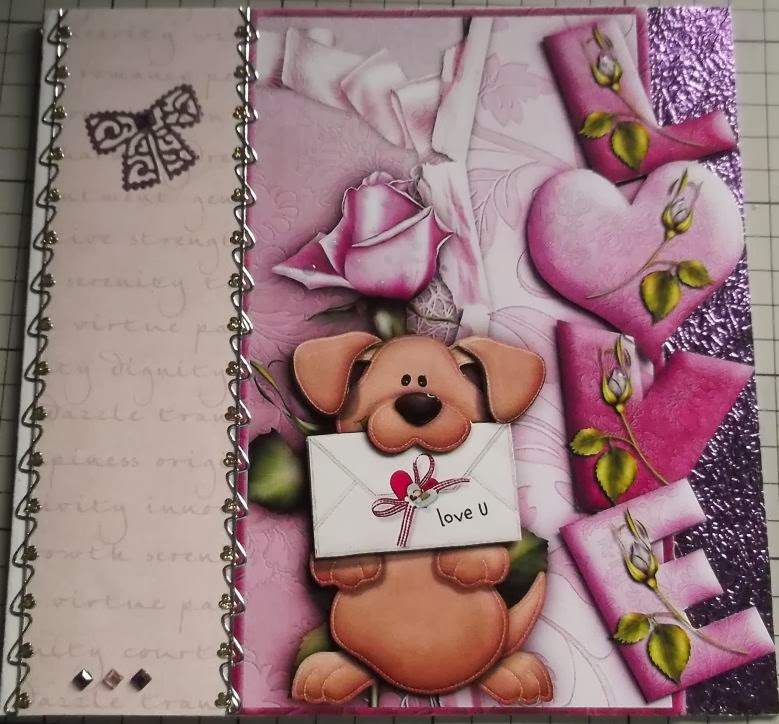 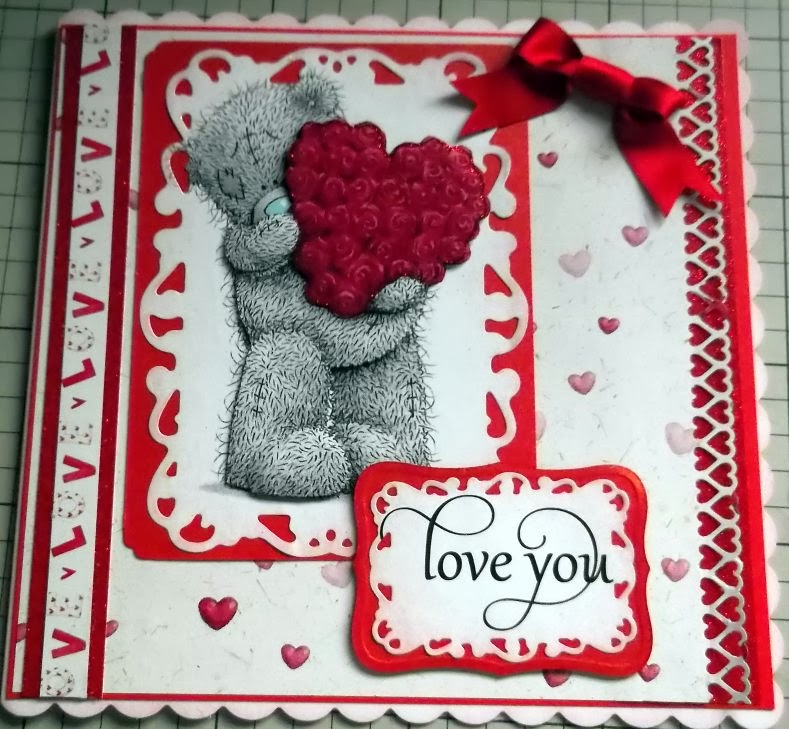 So she asked would I mind doing her some Valentine’s cards....that was it, I made a start that day. 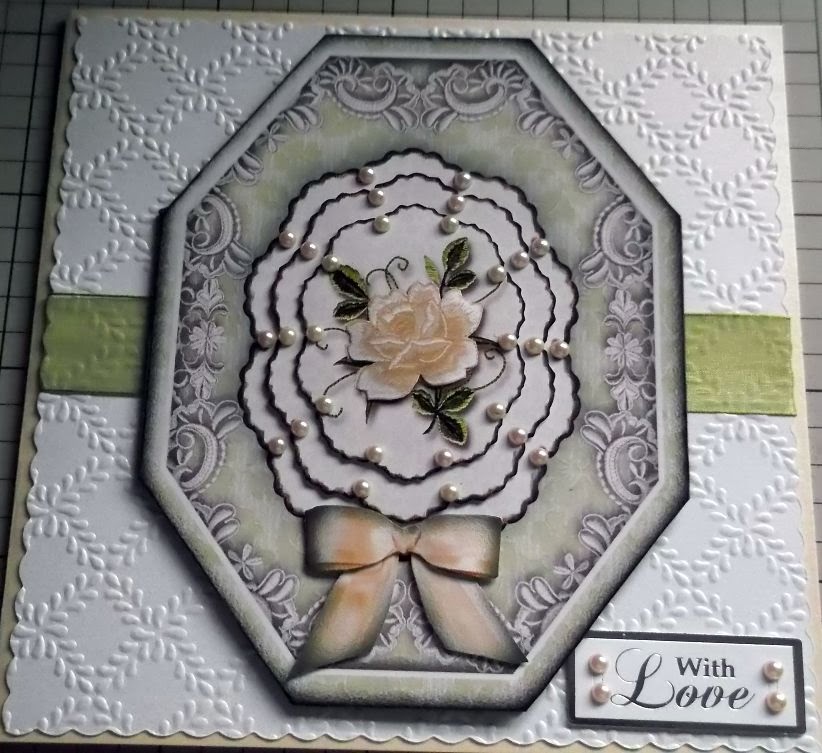 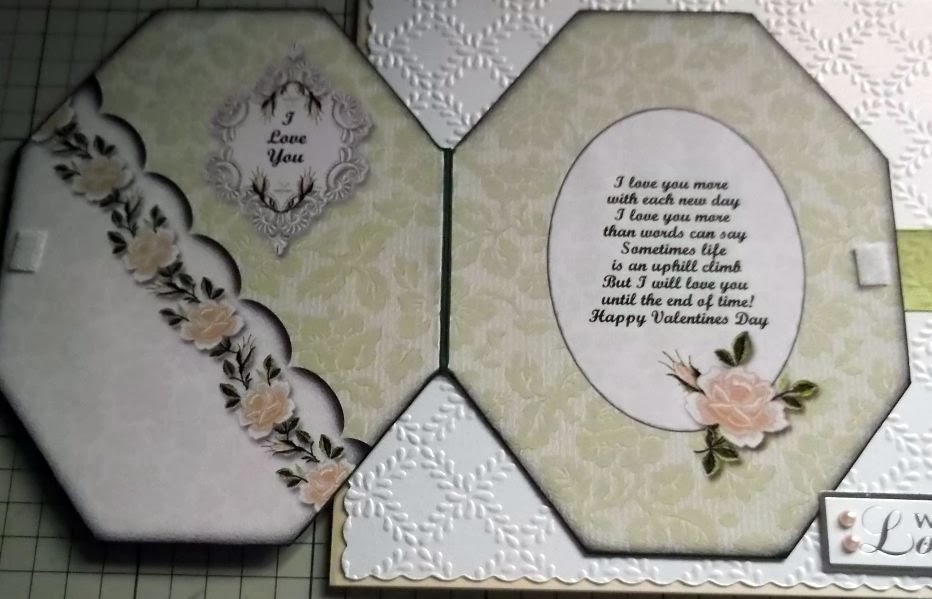 I have now finished the 8 cards I aimed to do and have to say I am quite pleased with them, especially as I tried to work outside my comfort zone. 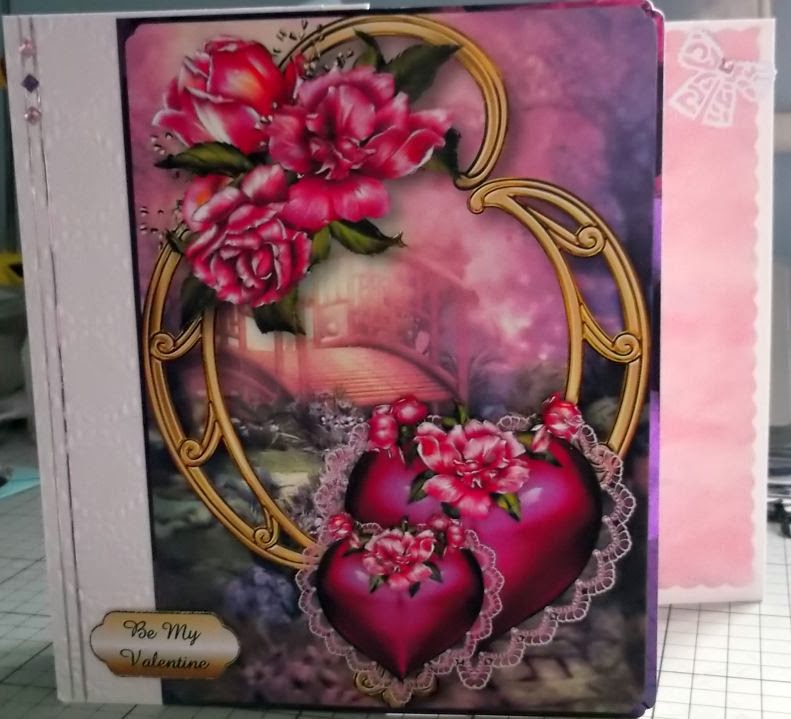 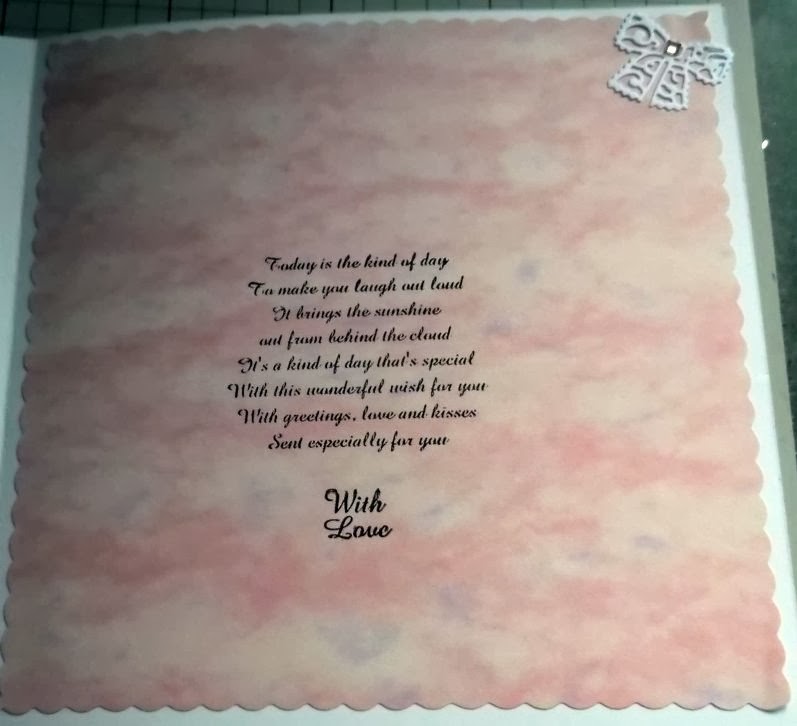 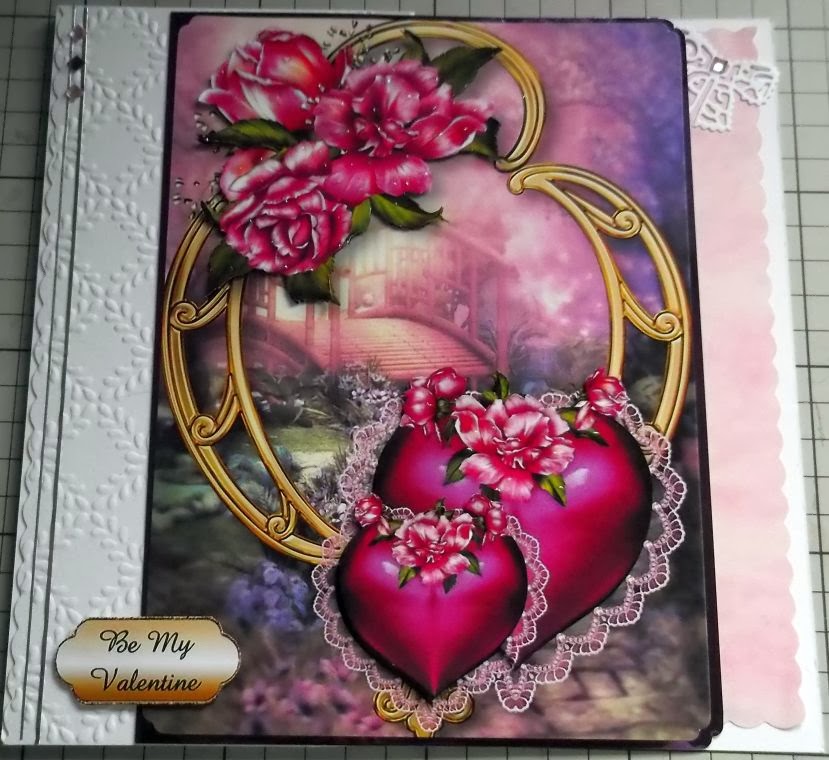 The green card turned out far better than I imagined, I made it up and it just looked small and dull so I decided it might work on an 8x8 card – and it does, I had to use a small square of Velcro to keep the card closed but I think its lovely. 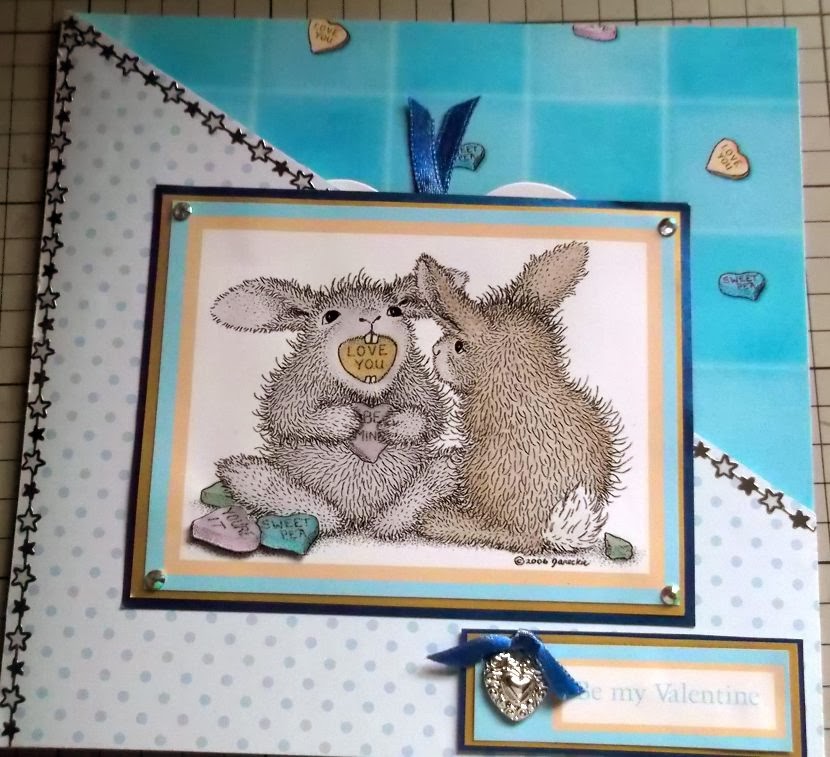 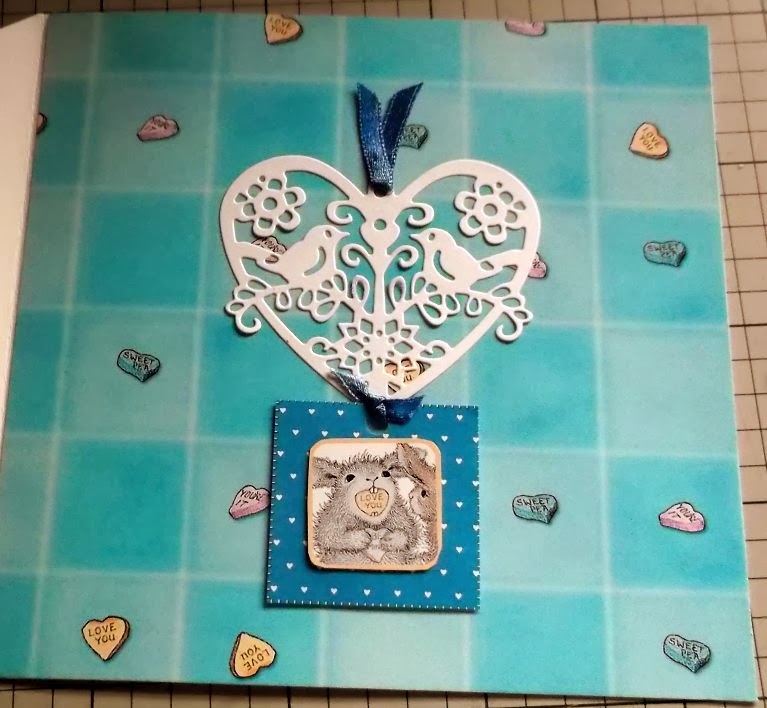 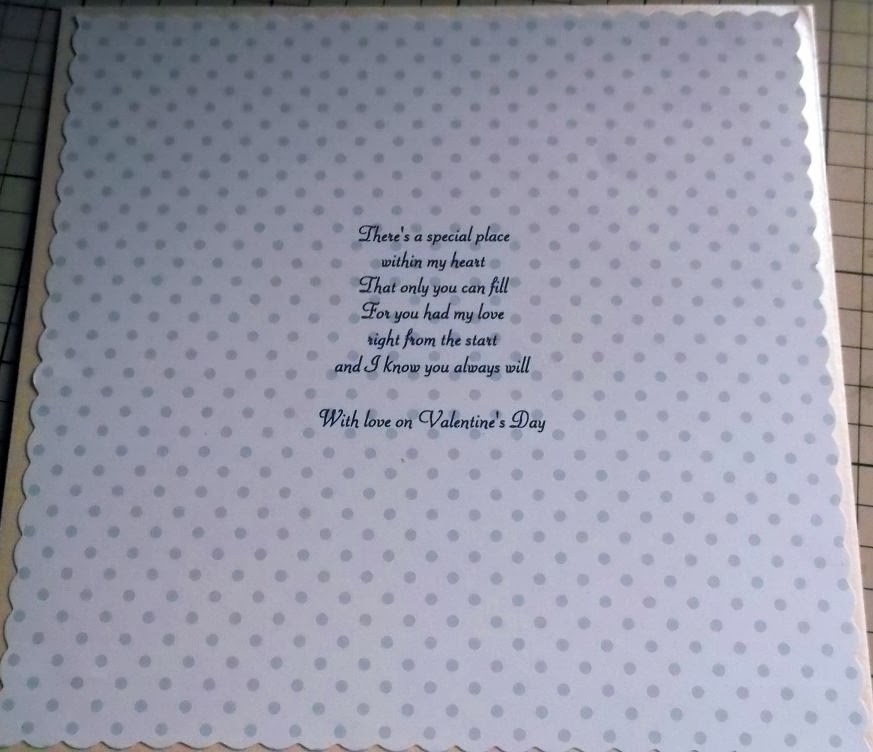 So have a look through and see what you think? Have I managed to cover most age ranges for male and female...I really hope so!! 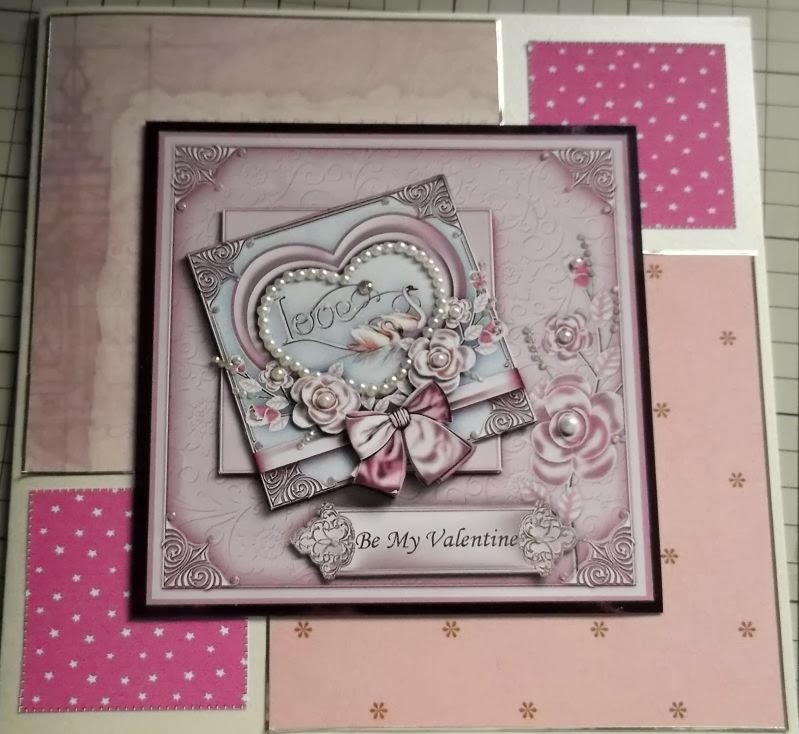 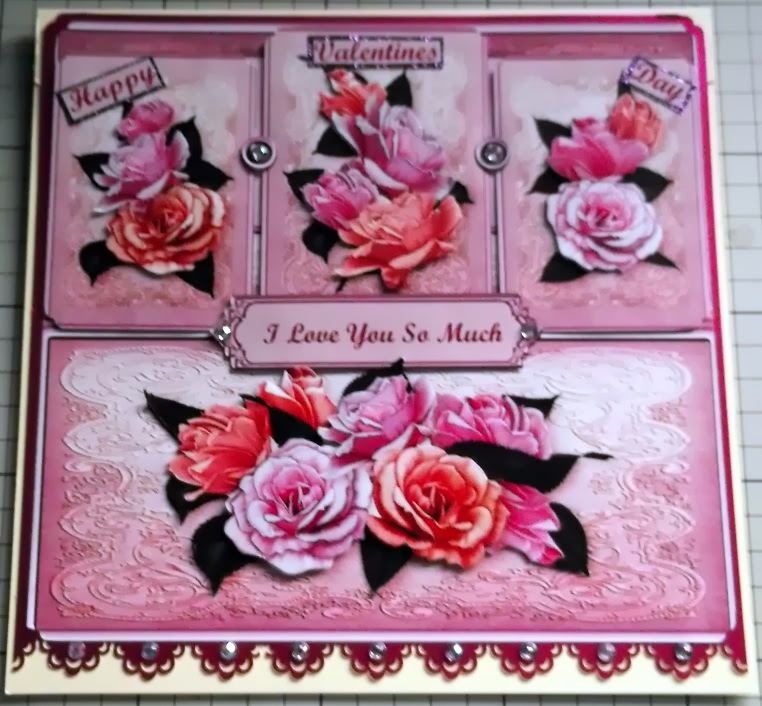 Just hope Liz will be pleased with them oh and her customers too!
Till the next time then
x

Hello
I’m late this evening but as I have finished the card I wanted to share I thought I would get it done
Before I go any further I must explain that this turned into a real labour of love as it has been a catalogue of disasters but I have worked through them!
Some time ago I bought some Me To You rubber stamps and the official ink pads for my daughters but August time they brought them back as they just aren’t into crafting as much now they are at work full time.
I decided to do some stamping one day and was so annoyed to see the blue ink pad had rotted away to nothing – so I ordered another from EBay.
At the weekend a few of us went to a craft shop we knew were having a sale and I saw the perfect stamp for the card so bought it – came to do the stamping tonight and the blue ink pad has gone the same again and the rubber stamp is faulty as it seems to have a dip in the rubber so wont ink up which means it won’t stamp out!!!
So as I said I worked around these problems and managed to knock a tower of 1mm gems over – and typically I hadn’t put the lid on after using them so had around 5000 gems bouncing all over – have to say they look great stuck in the rug!!! 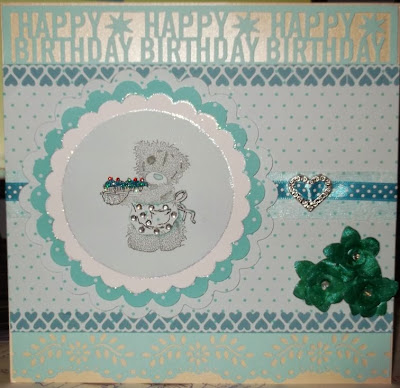 So to the card...I used the Do Crafts Digital Designer cd rom to print out the backing paper and the round scalloped rosette.
Using round scalloped nestabilities and my Cuttlebug I cut out the rosette and a slightly bigger mat from the spotty paper.
I stamped the image in the centre of the mat and re-stamped the apron onto the spotty paper cut it out and attached to the image with sticky pads.
Next I cut a piece of light turquoise card and punched Happy Birthday 3 times across the top and then flower with leaves 3 times at the bottom – the punches were Martha Stewart deep edge punches.
I measured out a piece of spotty backing paper and used a hearts border punch – again Martha Stewart – to punch a border to the top and bottom of the paper, this was then matted onto a darker turquoise card stock.
I used a length of aqua organza ribbon with white butterflies printed on it and fixed this across the card and secured at the back.
Next I used a length of turquoise spotty ribbon from Mei Flower and added a silver heart ribbon slider to the right hand side, then secured the ribbon at the back.
I added this panel to the card using double sided tape then stuck the scalloped panel to the card front using sticky pads.
To finish I added turquoise glitter to the cup cakes and a tiny red gem to the tops. Small clear gems were added to the apron.
Next I used a Sakura quickie glue pen to draw a fine line around the inner circle and middle scallop line then covered with Glamour Dust.
Finally to the flowers – I bought these as plain white flowers from www.dreamees.co.uk and simply sprayed them with Cosmic Shimmer Aqua Lagoon spray and then a quick squirt of Radiance Rain but not sure what colour, I stuck the 3 flowers to the bottom right hand side and added an pointed AB gem to each centre!
So there you have it! Finished despite all the problems
See you again soon folks
xxx.

Hello everyone...
My knee is healing steadily, I have done as I was told, had it elevated and plenty of rest, I had the stitches out and the nurse was quite surprised at how much movement I had already – after all its not yet 4 weeks since the knee replacement operation!!
As I normally try to do I checked out the CD Sunday Challenge Blog and this week I loved the theme so had to get cracking
The card looked better in my hand than in my mind which has to be a good thing!
The cd I used was by Cupcake Crafting now known as Creative Crafting or something similar 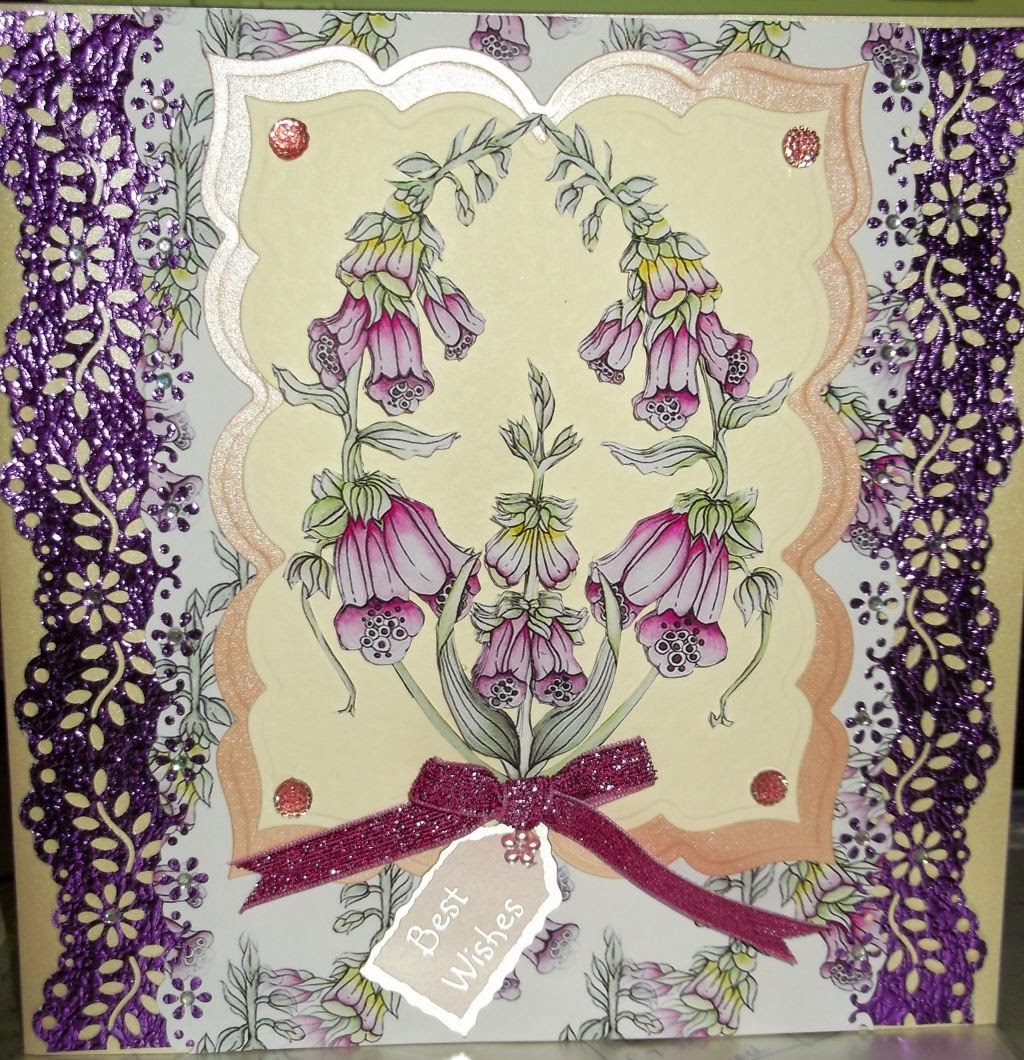 The cd was cd17 Floral Delights
I printed the main decoupage and a few different backing sheets, well I have to say the decoupage really was a challenge in itself!!! I think it took me around 2 hours to cut out but I was so pleased that I didn’t cut off anything that shouldn’t have come off nor did I leave white sections.
I used an 8x8 creamy coloured card as my base, I used a sheet of purple metallic paper I came across and punched each long edge using a Martha Stewart deep edge punch and stuck it to the front of the card.
Next I worked on the inside of the card, I covered the inside with 2 sheets of backing paper and kept the cut offs to use on the front.
I had printed the insert and carefully cut out the centre, I folded the insert in half, then into a gatefold, added double sided tape to the gatefolds, removed the backing from the top piece only, lined up where I wanted the insert on the bottom of the card then simple closed the card, flipped over and removed the backing tape from the other side – easy or what!!! 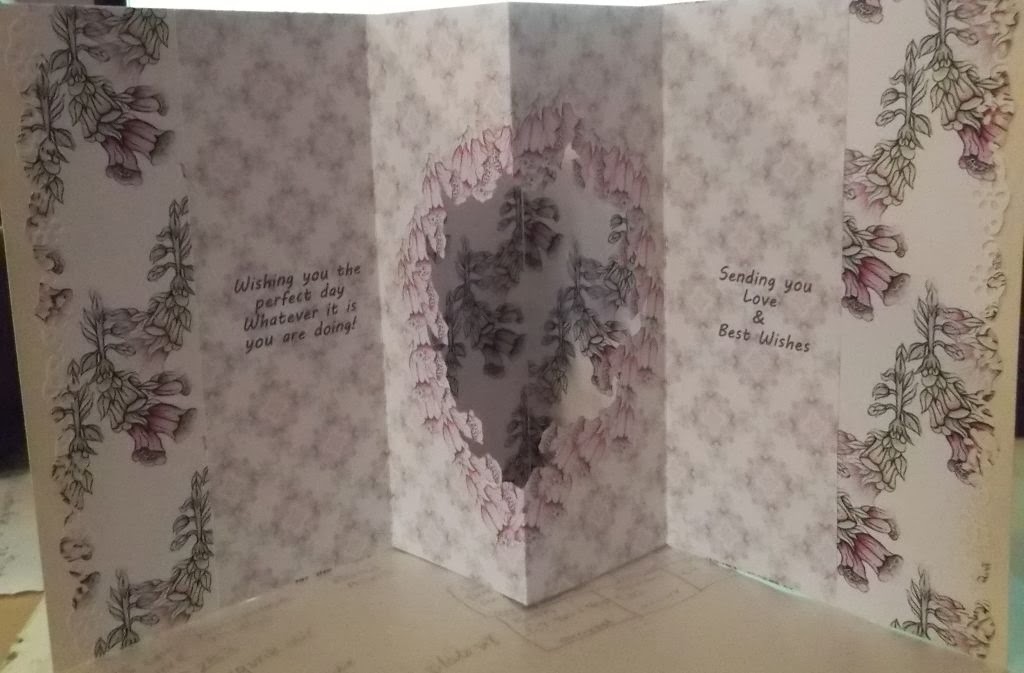 Back to the front I used one of the cut off bits of paper and a small flower border punch from Martha Stewart to punch along the long sides, this was then attached to the card front using double sided tape.
I used the Grand Calibur to cut out 2 mats, one was in a pink pearl and then a size smaller which I checked the decoupage would fit on – this was cut from a soft cream card. 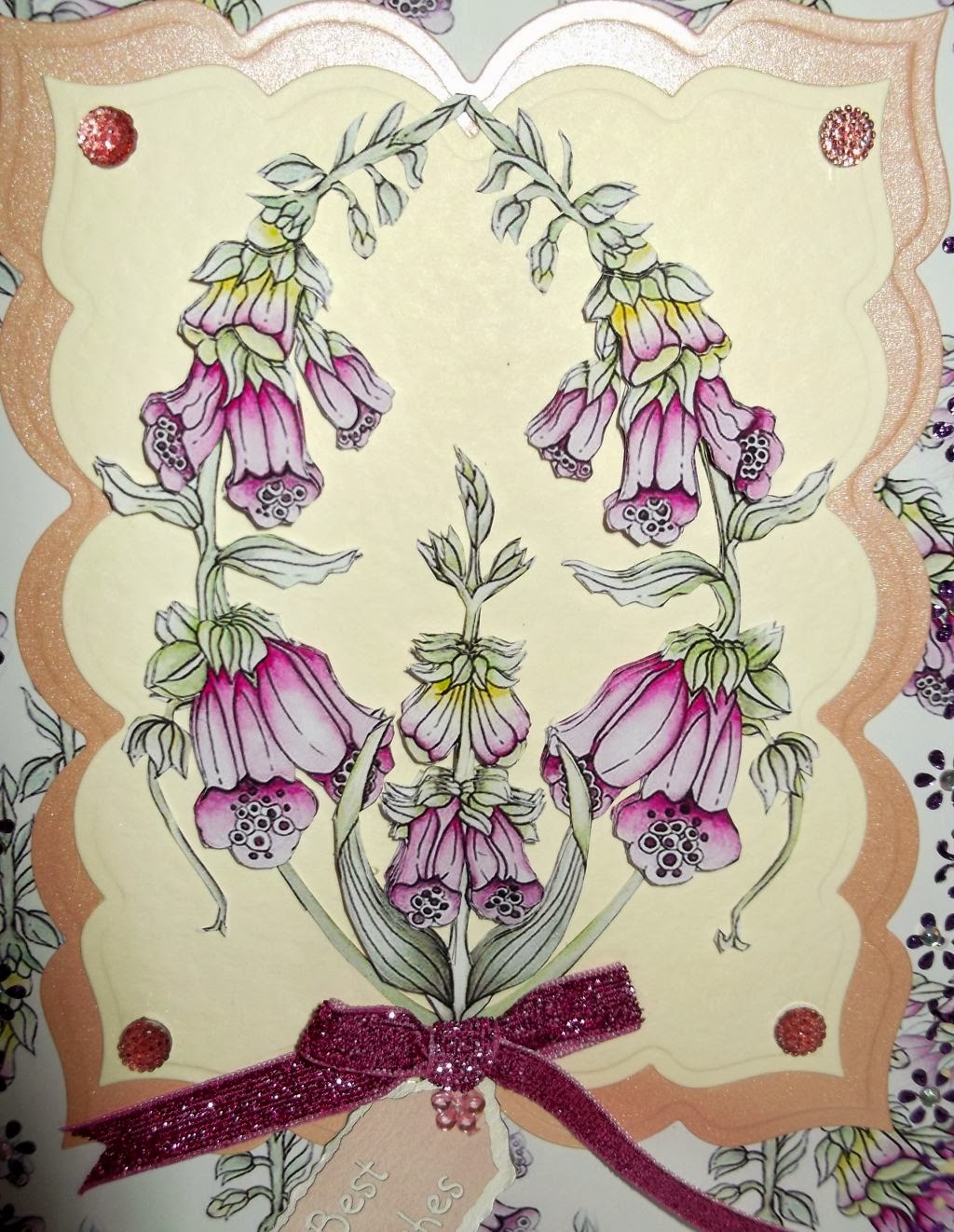 Once the mats and decoupage were in place I finished off using pink crystal gems in the 4 corners of the cream mat, tied a bow using pink glittered ribbon and added a Best Wishes gift tag with flower gem, these all went around the stem of the flowers.
Clear AB gems were placed in the centres of the flowers along the punched borders...I used 3mm for the paper border and 4mm for the purple.
As I said it turned out better than I hoped it would.
I made it just for adding to my blog and entering in the CD Sunday blog
Bye for now – see you all again very soon
xxx


Happy New Year
Lets hope this one is a good one for us all!

I know Christmas is as far off as it can be now but this is a cad I made up as a quick and easy for hubby to give to his falconry club members - as they all have birds of prey themselves, mostly owls, this kind of card was appropriate. 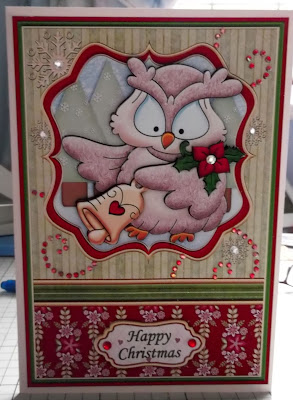 The sheet was from www.craftsuprint.co.uk and was designed by Janet Briggs.
As I said I was looking for quick and easy but nice so I cut out all the elements from the sheet then matted the main image onto green card then red card and finally onto my white card blank.

I added the decoupage to the owl using small sticky pads, added a sentiment and then the fun bit, adding all the pretty AB gems

I added a red gem at either side of the sentiment, then white pearls to the middle of the snowflakes as well as the flower round the owls neck

Needless to say the card went down well - I will share another tomorrow.